skip to main | skip to sidebar

A PROUD OF NEUROLOGY 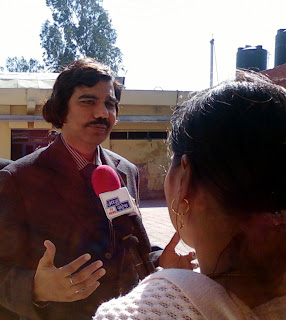 Prof.Sunil Pradhan
MD,DM(Neuro),FAMS
Former M.S (IHBAS)
Head,Department of Neurology,IHBAS
This article describe about the life achievement of that person who is completely dedicated for the patient care services in neurological field. A person not only hard working and sincere but helpful to needy patients. This inspired the other persons too which connected to the patient care services directly or indirectly . Prof. Sunil Pradhan is one of the famous Neurologist in India and presently giving his services at IHBAS,Delhi which is one of the reputed Institute of Northern India for the treatment of different types of Mental disorders e.g Epilepsy,Seizures,Dementia,Alzhiemers,Depression etc.Let us know about the Prof. Pradhan’s work and contribution in the field of neurology in detail:-

Dr Pradhan was born in 1957 in Najibabad ,Bijnaur,U.P. After initial schooling , he graduated from King George's Medical College, Lucknow, in 1979. Did post‑graduation in Internal Medicine in 1983 and DM in Neurology in 1986. After spending some time at Jaslok Hospital, Mumbai; National Institute of Mental Health and Neurosciences, Bangalore; and The Nizam's Institute of Medical Sciences, Hyderabad, he joined as a faculty the Sanjay Gandhi Post Graduate Institute of Medical Sciences, Lucknow, in 1989, where he worked at different faculty positions .In 2007, he joined IHBAS as a Head of Neurology Department and then become a Medical Superintendent of IHBAS in 2008. As a M.S, he did a lot of work in this institute like covering the shelters for the patient to safe them from cold , Install the Banners and Holdings at different locations in this institute for aware the patients and their relatives about the facility and diagonosis of the Neurological treatment. Also one of his major achievements in this institute is the opening of New Electrophysiology Lab which having latest neuro-testing equipments like Biologic 32 Channels Polysomnography Machine which can be extended upto 64 channels , Nicolet 32 Channels digital Portable EEG Machine , Key-Point EMG Machine.This New EPS Lab is of international standards and wooden polish in the lab improve its beuty .All faculty staff of this Institute appreciates for his unique work done in this institute.His name also nominated for the post of Director,IHBAS in 2008 for his hard work and sincerity about his work.Still he is working as a Head and Professor in the Department of Neurlogy,IHBAS and give his important contribution for the treatment of various mental disorders and progress of this Institute.

Dr Pradhan has achieved a unique distinction among the physicians by virtue of describing two new clinical signs in medical literature, one in Duchenne and another in facioscapulohumeral (FSHD) muscular dystrophy.

Dr Pradhan has invented two new electrophysiological techniques. The first to study non‑invasively the intercostal nerves, as there was no technique to study the trunkal nerves. The technique got worldwide recognition with its inclusion as `Pradhan's method' in a textbook published from USA.

Pradhan also elucidated the mechanisms of neurophysiological F‑response generation in health and disease and discovered a new phenomenon of F‑response multiplicity, presence of which was always indicative of lower motor neuron disorder.

Pradhan's work on epilepsy has suggested that the presence of gliosis around a lesion makes the person prone to chronic epileptogenesis with poor seizure outcome. He found that a subset of patients with neurocysticercosis develop perilesional gliosis and show relative drug resistance during anti‑epileptic drug (AED) therapy with a very high rate of seizure recurrence on stopping the treatment. He also described for the first time tickling seizures and micturition induced reflex epilepsy.

Pradhan's novel observation that Japanese‑B encephalitis (JE) virus may sometimes produce lesions selectively in the substantia nigra, has provided clue to the possible role of viruses in the genesis of early‑onset of Parkinson's disease..

Pradhan has also described the diagnostic MRI features of Hirayama type monomelic amyotrophy (in 1997) and this remains so far the only objective method to diagnose this otherwise purely clinical entity. He also described MRI and other features of acute endosulfan poisoning and based on striking similarities with the MRI features of Huntington's disease (lesions of which have high lactate contents), proposed blockade of mitochondrial energy metabolism as a neurotoxic mechanism. He also has another novel observation to his credit, i.e. the description of sheathing of retinal vessels in Tuberous Sclerosis.


SOME AWARDS/HONOURS/PRIZES
Ø ICMR Award for the discovery of a new clinical sign and a new electrophysiological technique in 1994 and 1996 respectively.
Ø Two awards from Indian Academy of Pediatrics, in 1995 and 1996.
Ø Shakuntala Amir Chand Prizes for Clinical Neurophysiology,ICMR,1996
Ø Shanti Swarup Bhatnagar Prize in Medical Sciences, for the year 2002.
Ø BC Roy award would be felicitated by the IMA, Lucknow in 2003 0n Doctors Day
Ø Invited twice by Oxford Muscle Symposium, UK, in 1999 and 2002, to present his clinical signs
Ø Invited by Tokyo Women's University, Japan, in 2002, to talk on his research work on Japanese Encephalitis.

He is a good clinican but not a good person.He is very cunning and selfish person.
He is very proudy and rude person also.

He is the person who love his work and fully devoted. My brother is suffering from LG muscular destrophy and someone advise me to meet Dr Pradhan and after meeting i found that he is very simple and hard worker.

i was suffering from brain tb..and was not feeling well for almost 3 yrs..then some one sugeste me to go to dr sunil pradhna..and i started my treatment in eye of dr sunil pradhan..i recoverd slowly and now i m fine..i really thanx to thias sinsere and fine dr in his works..i really very much thankfull to u dr ..thanx a lot..infact i want to meet him once to say thanx in real..he is real dr who love his work siserely ..and treat evrybody siserly.thanx a lott dr .we salute u.
ur patient from IHBAS.

i was suffering from brain tb..and was not feeling well for almost 3 yrs..then some one sugeste me to go to dr sunil pradhna..and i started my treatment in eye of dr sunil pradhan..i recoverd slowly and now i m fine..i really thanx to thias sinsere and fine dr in his works..i really very much thankfull to u dr ..thanx a lot..infact i want to meet him once to say thanx in real..he is real dr who love his work siserely ..and treat evrybody siserly.thanx a lott dr .we salute u.
ur patient from IHBAS.

THIS BLOG PROVIDE THE LATEST NEWS LIKE WORKSHOPS, CONFERENCES, R&D ACTIVITIES AND JOBS POSTING IN THE FIELD OF NANOTECHNOLOGY AND NEUROSCIENCES!!!!!!!!!

MOHD FAISAL NAWAZ (M.Sc,M.Tech)
Bangaluru, karnataka, India
I M WORKING AS AN ENGINEER ON A WORLDS LARGEST SOLAR TELESCOPE PROJECT--.ALSO I WORKED AS AN ELECTROENCEPHLOGRAPHER IN DEPT OF NEUROLOGY,DELHI FOR TWO YEARS.MY MAJOR GOAL IS TO FOCUS FOR RESEARCH AND DEVELOPMENT IN THE OPTICAL DESIGN , THIN FILM OPTICAL COATINGS AND ITS CHARACTERIZATION , NEURO-DIAGNOSTIC FIELD...LIKE DRUG DELIVERY,ARTIFICIAL ORGANS,SPINAL AND BRAIN SURGICAL FIELD,R&D IN MEDICAL IMAGING TECHNIQUES LIKE ELECTROPHYSIOLOGY,MRI,CAT SCAN,ULTRASONOGRAPHY,COLOUR DOPPLER,PET SCAN,CONVENTIONAL AND DIGITAL X-RAYS AND USING NANOPARTICLES IN MEDICAL IMAGING, MAKING OF NANOBOTS(A TINY SURGICAL INSTRUMENTS WHICH CAN WATCH THE BODY TUMORS AND OTHER DEFECTS INSIDE THE HUMAN BODY WITHOUT ANY PAIN),GENOME SEQUENCING AND LOTS OF MORE WHICH UTILIZE THE NANOTECHNOLOGY---IN SHORT I AM AMBITIOUS TO WORK FOR THE PATIENT CARE SERVICES----GOD BLESS ALL Kindly give your suggestions/comments about the posted articles on this blog at bushamr@gmail.com